In April 2018 the UN Secretary-General provided a directive for IOM and UNHCR to lead and coordinate the regional response to the situation of refugees and migrants from Venezuela seeking access to basic rights and services, protection, as well as self-reliance and socio-economic integration. Further to this directive, the Regional Inter-Agency Coordination Platform was established as a forum to coordinate the response efforts across 17 countries of Latin America and the Caribbean, with a particular focus on achieving coherency and consistency throughout the response.

At national and sub-regional levels, the Regional Platform is complemented by local coordination mechanisms. Dedicated National and Sub-regional Platforms, collaborating closely with host governments, are charged with the operational coordination and implementation of the Regional Refugee and Migrant Response Plan (RMRP). Such coordination platforms are in place in Brazil, Chile, Colombia, Ecuador and Peru - at national levels - and in the Caribbean, Central America and Mexico and Southern Cone - at sub-regional levels. Their configuration is based on each situational context and the operational capacities of governments and RMRP partners, considering existing coordination structures.

The structure of the RMRP is based on thematic sectors, each of which focuses on a series of responses to the situation of refugees and migrants from Venezuela, as well as that of host communities. The sectoral structure has maintained a dual approach to the regional response: including both the provision of immediate humanitarian needs and long-term development objectives to ensure a sustainable and inclusive response.

The sectoral approach has been key for a greater ownership of RMRP activities and the R4V Platform by different non-governmental organizations (NGOs) that have assumed the co-leadership of different sectors. IOM is not only actively coordinating all the Platform’s inter-sectoral efforts but it is also strategically co-leading several sectors, including the integration, shelter and humanitarian transportation, the human trafficking and smuggling subsector, and working groups such as information management and communication.

Inter-Agency Coordination Platform for Refugees and Migrants from Venezuela (R4V) 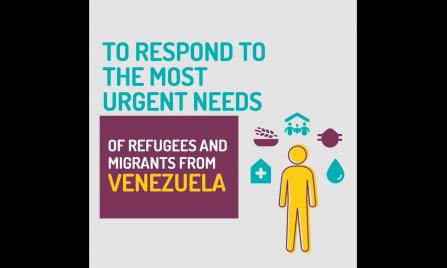 What is the Refugee and Migrant Response Plan?

A Thousand ways to be a Man

Subscribe to IOM newsletter to receive the latest news and stories about migration.